Is the end of call centres closer than we think?

Call centres have created millions of good jobs in the emerging world nut now technology is threatening to take those jobs away again in what could be the end of call centres as we know it.

These can be department stores, cinemas or bookshops—anything that will fill a large space and lure customers past smaller boutiques.

The idea is that a cinema-goer might pause to buy a leather jacket; and, in a lovely symbiosis, the monied youngsters who shop for clothes and sunglasses might decide to catch a film.

Take a lift to the top floor of the new SM Aura shopping centre in Manila, and you will find not a cinema or a Neiman Marcus but an enormous call centre.

In the Philippines, the arrangement makes perfect sense.

This one, run by Teleperformance, a multinational based in France, expects to get about 100 walk-in job applicants a day. Yet Manila’s call centres do not just need monied youngsters.

They also produce them, in huge quantities.

Were there no call centres in the Philippines, there would be many fewer middle-class people, and hence fewer shopping centres.

Seldom has any country been so transformed by one industry as the Philippines has by call centres.

The first “business process outsourcing” jobs appeared in the 1990s: the term covers tasks from answering phones to processing invoices and animating TV shows, mostly for rich-world firms and governments.

This loosely defined industry now employs some 1.2m people and accounts for about 8% of the Philippines’ GDP.

The country is especially strong in call centres: it has already overtaken India, even though India has about 12 times as many people (see chart). 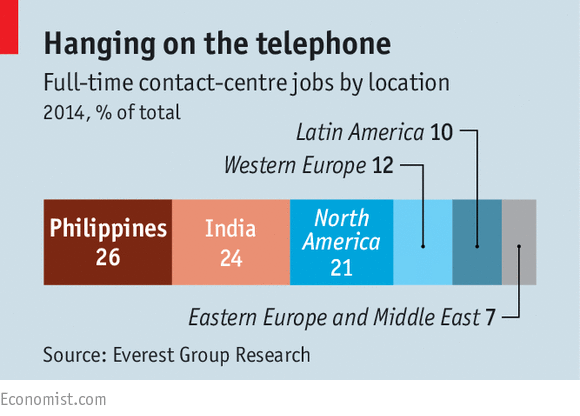 Yet the Philippines is also, probably, the end of the line.

New call centre technologies are poised to abolish many call-centre jobs and transform others.

At best, jobs will be created more slowly in the Philippines and India; at worst they will vanish.

And it is likely that nowhere else will be able to talk its way out of poverty as they have done.

Companies put call centres in the Philippines for three reasons, says Alfredo Ayala of the Ayala Corporation, a conglomerate, who set up one of the first ones.

The country’s telecoms market had been deregulated, holding costs down. The government designated call centres, or “contact centres”, as they are formally known, an export industry and cut their taxes.

And firms wanted to diversify beyond India.

A fourth reason, which Filipino businessfolk discuss rather delicately, is their customers’ prejudice.

Americans, in particular, simply prefer talking to Filipinos than to Indians.

Filipinos often describe their accents as “neutral” or deny that they have one.

This is mostly the charming human delusion that everybody except oneself talks funny; yet there is something to it, says David Rizzo of Teleperformance.

When American callers hear Indian accents, they know they are talking to a call centre in India.

But they cannot quite place the Filipino accent.

To add to the confusion, Filipinos are experts on American culture, a legacy of military occupation in the early 20th century.

The relative preference for Filipino accents has become so strong that large Indian outsourcing firms such as Infosys and Tata Consultancy Services have moved some of their “voice work” to Manila.

Yet it creates a problem.

Late morning in New York is midnight in the Philippines.

So a Filipino serving the American market—as about 70% do, in business-process outsourcing as a whole—will probably have to work through the night.

The night shift has become so common that some karaoke bars in Manila stay open around the clock.

Jobs with more civilised hours tout the fact as though it were a novelty. “Wake up when the sun rises and sleep after it sets!” promises one advertisement. 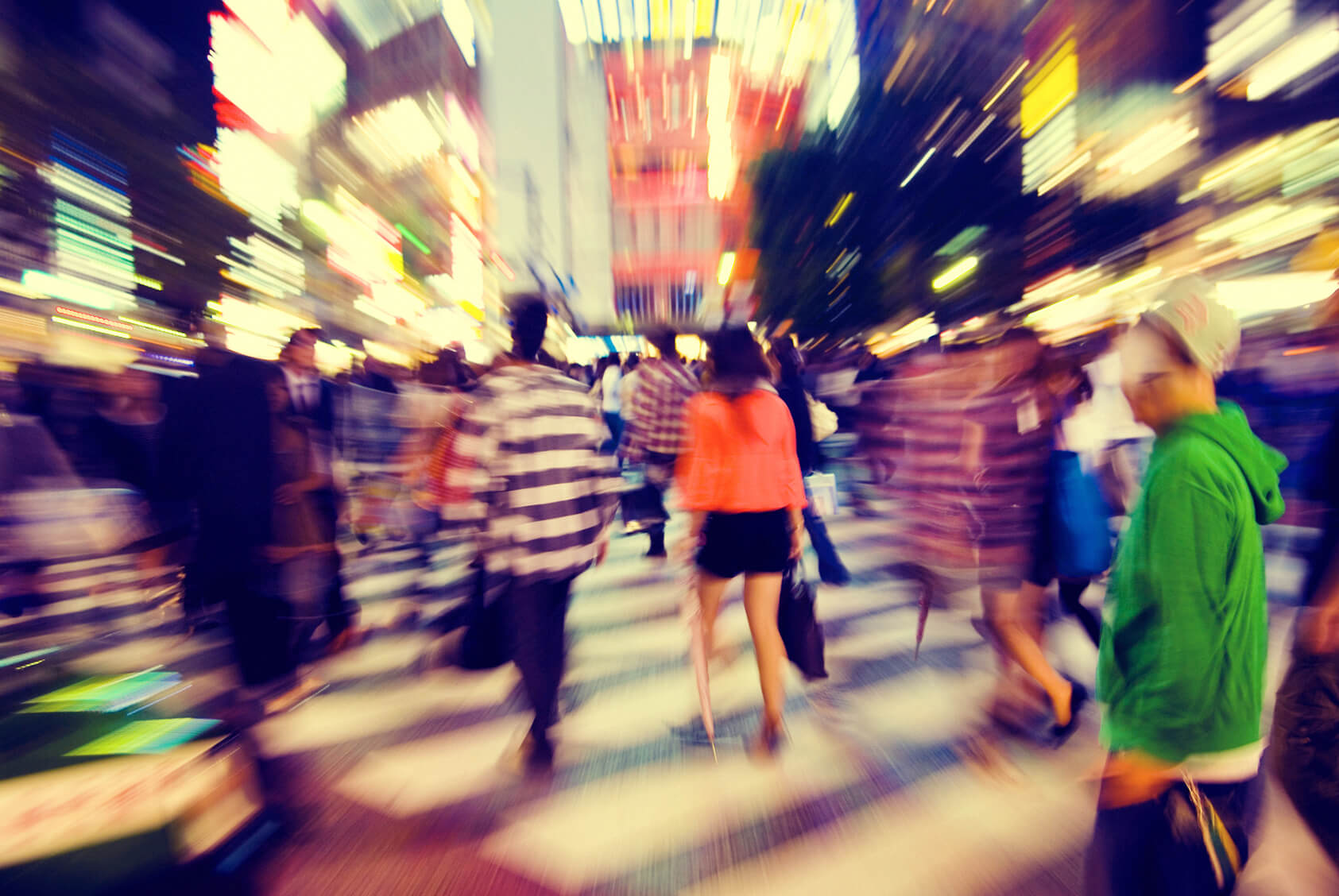 Night work is tough, say a dozen call-centre workers who have come off their shift at 7.30am, and are sipping coffee in Manila.

They find it hard to sleep by day and see too little of their families.

And the job makes those who do it “toxic”, says one woman.

For all that Americans prefer Filipino accents to Indian ones—which these Filipinos can impersonate, amusingly if not accurately—they still suspect they are talking to foreigners, and may be angry and rude.

What do Americans say? “Fuck you,” chime these polite young people, in unison.

Some officials and politicians claim that call-centre workers are behind a rise in HIV infections (albeit from a low base).

Workers often cram into shared flats, and their odd hours unmoor them from ordinary life.

A report by the University of the Philippines in 2009 found that call-centre workers in Manila were slightly more likely than other young people to take drugs, and were much more sexually active.

More than half of the men reported having had casual sex—a quarter of those with other men. Only 44% said they had used condoms on the last occasion. Women said the share was even lower.

Overall, though, the call-centre explosion has been a colossal boon for Filipinos who speak good English.

With so many employers to choose from, they can demand gyms, cafés and computer-games rooms, as well as higher pay.

And though the night shift is hard, it is far better than being a maid in Saudi Arabia.

The Philippines has long exported workers: remittances are worth around 10% of GDP.

But business-process outsourcing is catching up fast.

Many of the 1.2m people who found jobs in outsourcing in recent years would otherwise have gone abroad, reckons Mr Ayala.

So it is no surprise that other places would like to repeat Manila’s trick.

Outsourcing firms are already building contact centres in provincial cities in the Philippines, where employees are less picky.

And other countries, some of them in better time zones, are trying to grab a share of the business.

But they are likely to be disappointed because the call-centre industry is on the verge of profound change.

How technology is accelerating the end of call centres

Much of the call-handling and data-processing work sent overseas is basic and repetitive, says Pat Geary of Blue Prism, a British technology firm.

When somebody challenges a gas-meter reading or asks to move an old phone number to a new SIM card, many databases must be updated, often by tediously cutting and pasting from one to another.

A major contributor to the end of call centres is the simple fact that such routine tasks can often be done better by a machine.

Blue Prism makes software “robots” that carry out such repetitive tasks just as a person would do them, without requiring a change to underlying IT systems—but much faster and more cheaply.

The firm has contracts with more than 100 outfits.

Increasingly, Western companies prod customers to get in touch via e-mail or online chat. Software robots can often handle these inquiries.

The cleverest systems, such as the one Celaton, another British firm, has built for Virgin Trains, refer the most complex questions to human operators and learn from the responses.

The longer they run, the better they get.

It can quickly retrieve and display customer data on their screens, reducing the need to transfer callers to other departments (where, irksomely, they will have to prove their identity yet again) or log on to a creaky IT system (“I’m sorry, our computers are down at the moment”).

Software robots are only going to become faster, cleverer and cheaper.

Sarah Burnett of Everest, a research firm, predicts that the most basic jobs will vanish as a result.

Call-centre workers will still be needed, not for repetitive tasks, but to coax customers into buying other products and services.

That is a harder job, demanding better language skills.

So whilst it’s not necessarily a complete end of call centres, automation might mean fewer jobs, or at least less growth, in India and the Philippines, but more jobs in America and Europe.

Between 2013 and 2014 America’s share of global contact-centre employment rose slightly, from 19% to 21%, according to Everest.

Western banks are especially keen on repatriating work, says Arie Lewin of Duke University, an expert on outsourcing. That is partly because of America’s stringent but vague Dodd-Frank Act, which has made them paranoid about their supplier’s activities.

This might work well or badly for the Philippines.

Lately, for example, qualified nurses have been in demand to advise American patients on whether their sneezes and rashes might be serious—one result of cost-cutting inspired by Obamacare.

Or it is possible that computers will learn to handle almost all simple inquiries, leaving humans to deal with the most incoherent, irate customers.

If that happens, Filipinos will widen their repertoire of Anglo-Saxon insults.

Find a list of contact centre outsourcers, technology providers, consultants and more that all provide services to the Australian business community on the free CX Directory >>>