Another blow for the Australian call centre industry

In what could be a knock out blow for the Australian call centre industry, the campaign has begun by the ACTU to increase the minimum wage by a further $30 per week.

No one is disputing that costs aren’t continuing to rise making it tougher for minimum wage workers such as some call centre workers.

The challenge we face as an industry (and country) is that the more our wages continue to increase, the more attractive offshore solutions become.

If this spiral continues it will ultimately result in a substantial loss of jobs that will decimate our local industry.

Now I’m not standing on my pedestal and professing to have all the answers.

Companies are certainly starting to invest more in delivering a great customer experience and technology is helping eliminate less complex transactions (and therefore some cost) so contact centre work won’t be entirely eliminated in Australia.

But… there is no doubt in my mind that as our costs continue to rise the tipping point of onshore versus offshore continues to lean stronger in one direction.

Australia’s low-income workers say they are having to choose between paying for food or other necessities, as they pitch for a $30 a week wage rise.

The Australian Council of Trade Unions is pushing for a minimum wage increase to $686.90, or $18.08 an hour, in a submission to the Fair Work Commission’s annual wage review.

It’s a rise some workers say would ease the pressure they face in paying for everyday basics.

Melbourne call centre worker Lauren, who did not reveal her last name, told an ACTU press conference on Thursday life on the minimum wage was often “one small change away from disaster”.

“I can’t count the number of times I’ve sat with some of my co-workers and discussed, ‘I’ve got $40 bucks until payday. What am I going to spend my money on, do I put it on my myki, do I spend it on food?’ That’s the kind of struggle we face,” she said.

Hospitality worker Erin said many people worked two jobs not to “fund a lavish lifestyle” but “just to pay for everyday expenses we all have.”

ACTU secretary Dave Oliver said the gap between low-income workers and the rest of the workforce was widening.

“We are deeply concerned minimum wage earners are now falling further and further behind the rest of the workforce,” he said. 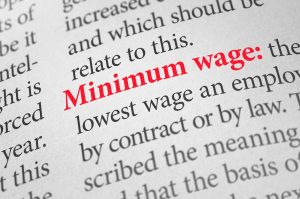 The minimum wage was stuck at 43.8 per cent of the average weekly full-time earnings, compared to 50 per cent 15 years ago, he said.

“If that trend continues, we’re deeply concerned we could in effect end up with a US-style working poor in this country.”

The union’s views are in sharp contrast to those of Australia’s peak business body, which says there should be a modest increase in minimum pay to help deal with high youth unemployment.

The Australian Chamber of Commerce and Industry has proposed an increase of no more than $7.90 per week to a total weekly income of $664.80.

“We need to make it easy for businesses to hire staff,” chamber spokesperson Patricia Forsythe said.

In its submission, the Australian Hotels Association said the hotel sector had experienced low growth, asking for no increase at all, or a maximum increase of $7.90 per week.

The Australian Industry Group has proposed a 1.6 per cent increase, which equates to a $10.50 a week rise in the national minimum wage.

Last year the ACTU called for a $27 a week minimum wage rise.

About 2.2 million workers are on the minimum wage.