Achieving any success in life starts with how we think, and what we think about because our mind moves to its most dominant thought.

Let’s face it, every one of your team members has a lot on their minds when they come in to start their shift.

They’re thinking about all the good and bad stuff that’s going on in their lives, right?

Regardless of what they’re thinking, you need to get them quickly focussed on what they need to do and how to do it to achieve their targets for the shift.

To change their thought process and pre-frame team members positively, amazing Team Leaders use a visualisation technique Dr Denis Waitley used when he was working with the staff at NASA and athletes on the US Olympic Team.

Having your team condition or pre-frame their mind before they begin a shift is a positive and beneficial way to achieving the outcomes both you and they want.

And, it’s not some Star Wars Jedi mind trick!

All top athletes and successful business people who demonstrate excellent ability use this technique.

The power of visualisation

Dr Waitley did a study with the US Olympic team where they wired up athletes with electrodes all over their bodies to see if anything happened when they visualised what they needed to do when they were competing.

What he found was that when these athletes started to visualise the activity they were about to do, he could measure the impulses sent from the brain to trigger various muscles and organs in the athletes’ bodies to prepare them for the physical activity to come.

After this study, visualisation became a fundamental technique widely used in sport and business today, and the same principle applies with your team members too!

What amazing Team Leaders do in their pre-shift meetings is guide their team through a visualization exercise where they see themselves on the telephone enthusiastically engaging with everyone they speak with.

They have them visualize having great calls and successfully handling any objections, closing sales and achieving their targets and KPIs.

And, especially counting any commission they earn and how good they feel spending it!

It’s really important to be as specific as possible when doing this exercise and adding as much emotion as possible because the degree of success you achieve is measured by the intensity and clarity of what you visualize.

That’s why you want them to also visualize counting their commission and how good they’ll feel spending it on whatever they want.

Try this technique with your team for the next two to three weeks to allow your team to get used to it, and I promise you, you’ll be amazed at the results!

Other resources that can help:

Share this content:
About Marc Carriere 21 Articles
With 34 years of worldwide executive experience managing Call Centre teams that have won 3 Silver and 3 Gold ‘Ardy’ awards, consulting with businesses mentoring and coaching their Call Centre Managers and Team Leaders and having owned a call centre himself Marc is well aware of the difficulties Call Centres face in consistently meeting their targets and KPIs.
Facebook YouTube LinkedIn

From Pain-Points to Opportunity

In this Virtual Coffee Workshop, we are workshopping with you to drill down and identify the underlying challenges and issues impacting your team and their performance. 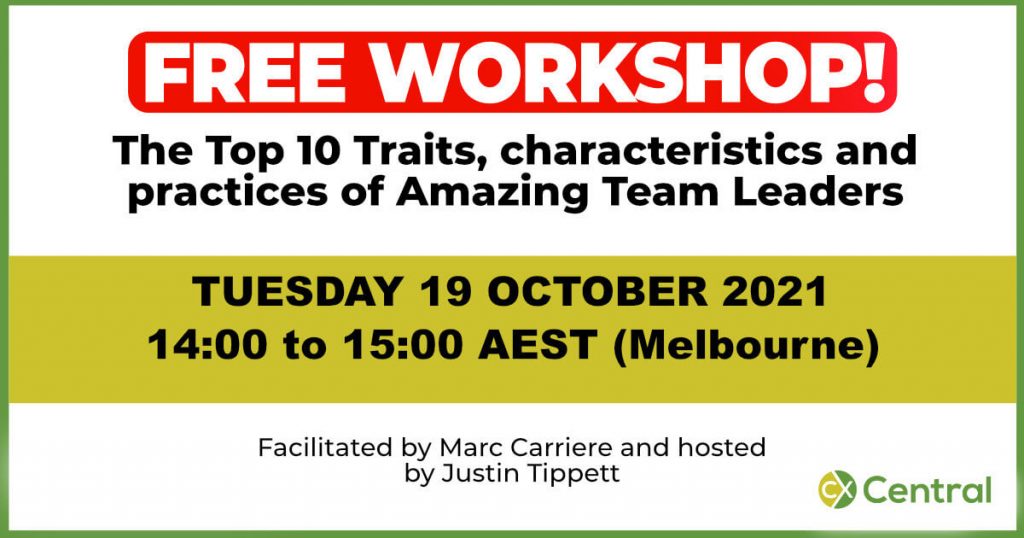 Don’t Hire Your Next Team Leader Until You Attend This Free Workshop! Team Leader coaching expert Marc Carriere shares the top 10 traits, characteristics and practices you need to look for when recruiting for Team Leaders in this workshop - suitable for both Team Leaders and Managers.

In this Virtual Coffee Workshop, you'll learn how to recognise what organisational, leadership and operational elements to utilise that will bring your team together and working in a remote environment.