In an article on www.lifehacker.com.au last week, author Spandas Lui took aim at the challenges in offshore call centres understanding the cultural differences and local sensitivities.

Or could it have been a simple misunderstanding on the definition of the word ideology?

Either way, it wasn’t a great experience for the customer or Telstra.

Telstra has had a rough week.

First, the company pulled back its support for same sex-marriage after pressure from the Catholic Church (editor: this has since been unfounded); one of its biggest clients.

Then, a Telstra customer service representative identified homosexuality as an “ideology” and not a sexuality during online correspondence with a customer.

It wasn’t the best choice of words, but it’s likely the Telstra representative did not understand the sensitivity of the issue at hand because he worked in an overseas call centre.

Simply put, there are some things you can’t train for.

After hearing Telstra was withdrawing overt support for gay marriage, something that affects him directly, he contacted the company’s customer service team to cancel his services with the telco.

But then, this happened: 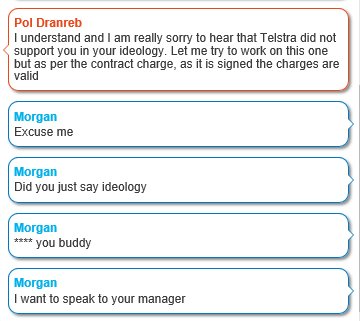 In attempting to deal politely with a customer, Telstra seemingly dug itself into an even bigger hole.

Same-sex marriage is a polarising topic in Australia and is an impetus for many heated discussions and verbal vitriol.

But in other parts of the world, it’s not a national discussion.

Hell, same-sex relations is still illegal in a number of countries.

Such is the case in India and Bangladesh, where many outsourced call centre are located.

The Philippines is also a popular country for call centre outsourcing work, and while it is a gay-friendly country, same-sex relations are opposed by the Catholic Church, which maintains a strong influence in the region.

Given Telstra’’s penchant for outsourcing its call centre jobs, it’s likely the representative who responded to Mr Archer’s enquiry was from overseas.

We’re not here to have a discussion about politics and religion.

On a very basic level, the folks from these countries that do get call centre work from Australia probably don’t speak English as their first language and are probably not tuning into our local news and therefore unaware of the controversial topics dominating our public discourse.

Combining those two factors, I feel sorry for the chumps currently being flooded with complaints from furious Telstra customers who are livid with the company’s stance on gay marriage.

All they can do is respond politely but, as shown in the example above, even that can be a dangerous path that is littered with landmines.

You can give foreign call centre workers a crash course on how to speak Australian, but to demand that they be sensitive to the issues that make us tick and to know how to craft perfectly-worded responses to issues blowing up in a country far away is just asking for too much.

We may take it for granted, but the nuances in language is rarely something that can be taught outright.

I’m sure contact centre workers would have been educated in some parts of the Australian vernacular but they can’t be expected to know all the subtleties of the English language.

That’’s the reality of outsourcing your customer service to an overseas country.

Yes, it is a heck of a lot cheaper to outsource this function and its only responsible for companies to lower their operational expense to ensure they can be profitable businesses.

I don’t fault them for outsourcing.

But they do need to consider the trade-off.

In the words of the International Customer Management Institute (ICMI):

“The downside of using [outsourced call centres] is that of risking your brand integrity. A third party workforce can seldom match the expectations in communicating your brand, because they don’t understand, and live and breathe your organisation’s mission and values in the same way as someone on the inside. Also, there can be gaps and challenges in passing along new technical and product information. In short, the personal touch may not always be present when customer service is outsourced.”

For some organisations, that’s not an issue.

For Telstra, which has struggled to sustain a positive brand image (a problem that has been exacerbated by a recent spat of bad press), it might want to reconsider whether it’s worth bringing more of its customer service operations back in-house to salvage.

It may be a move that could help salvage its reputation and avoid future embarrassment.

Editor: If you don’t know what Snafu means it’s a military slang acronym meaning “Situation Normal: All F#$ked Up”